Yesterday was a bit of a breakthrough or at least some relief.

With the last bank holiday, a mind finally at rest after an eventful year, and ultimately, an interesting idea, I finally decided to get back on track, I want to get into storyboarding after all and need to get used to draw digitally.

I am a no-nonsense kind of guy. I was an advocate of Tablet PCs and digital portable workflow back in 2006/2007.

The animatic and storyboard for my never finished short film was entirely done on a Tablet PC in cafés and parks but I gradually got tired of having to constantly make sure my Tablet PC had enough battery or having to carry a charger and reverted to pencil and paper.

No battery, no glare, ultra lightweight and I don't attract unwanted attention, quite the opposite in fact, people call me to return my lost sketchbooks those days.

In France I love using the recycled Zap notebooks.They are inexpensive, come in a vast array of colours which is great when sorting them out.

I used to rough out my comics idea on an A4 version as it allowed me to have several drawings on the same page. Recently I switched to an A5 version as it is more portable and I can have a single cleaned up drawing on one page as you will see below. 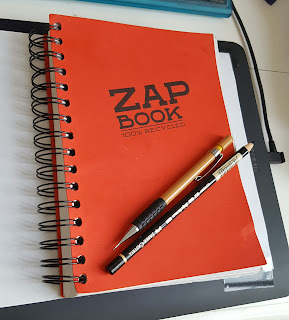 So how did I get started with my latest "Addiction recovery" story.

It all started when I went to visit my friend Katarina who just like me, is addicted to coffee but instead of a dark concoction, she offered me to drink tea from a massive bowl she had prepared.

I am always looking for ideas I can dramatize and this was a good contender.

I didn't want to forget about the idea so I quickly sketched out the setup in my sketchbook, this is the drawing on the top right. It is very simplified but has all the elements I needed to move to the next step, the details of the T-shirt would also allow to make the drawing a bit more specific. At the bottom right you can already see a rough thumbnail of the cartoony exaggerated version. 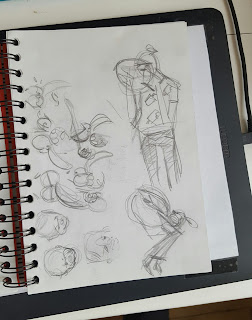 Once I got home, I cleaned up the drawing a bit and here is what I got. 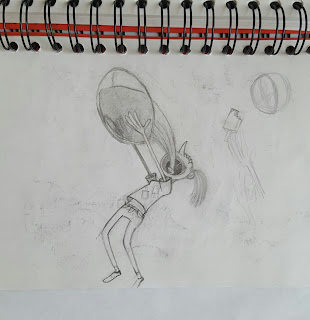 The drawing was pretty much nailed, with the tangents between the left arm and mouth ironed out and the hands posing simplified. I have been trying to draw hands in a more Milt Kahl way lately but I felt the drawing called for something akin to "Cloudy with a chance of Meatballs".

There was a bit of discussion regarding the realism of the gluteus maximus as I was trying to get a really clean line of action so I eventually settled for something more rounded.

Legs and torso were a bit too short for my liking so I corrected those in Photoshop with a colouring treatment I .... "borrowed" from my friend Sandra Brandstätter.

I also adopted her sketchy line work as the Uderzo/Franquin one which I love is way above my skill range for now.

Here is an example from the great Franquin popularised with Spirou and his character "Gaston Lagaffe". 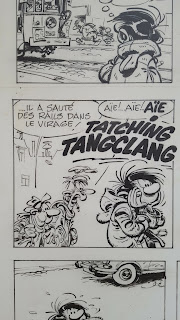 I don't have a scanner and having to adjust the proportions a bit of work digitally anyway, I just took a picture of the drawing and cleaned it up in Photoshop.

Ah ah!!! I was about to forget something!

Like I said earlier I am a no-nonsense type of guy.

Loads of vis Dev/concept artist can't accept that a drawing would be done on something cheaper than a 1 to 2k piece of kit like a Cintiq but with the space those take, the risk of malfunction or theft and the lack of portability, I'd rather stick to a regular Wacom tablet. I think I have also seen Zébé, Vis dev/story artist extraordinaire from Mac Guff, working on a giant Wacom tablet rather than a Cintiq.

Also a Wacom tablet is the only way to replicate the feel of the pencil pushing on the paper on the cheap by just sticking a piece of paper (layout paper for me) on the tablet as you can see below.

On a side note and for my old readers, I have discarded my Monoprice tablet since there are no drivers for Windows 10, yep that sucks. 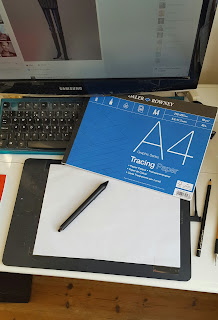 Now, here is a screenshot of my work file and the brush I used, or Tool, since this is what it is called. It is based on one of "Kyle's Ultimate brushset". Have a look, he seems to have a free pencil brush available if you are that cheap ;-)

As you can see there is nothing too fancy regarding my layers, the only trick was for the tshirt. I just created a pattern as I wanted to experiment with the size and placement then masked it. I didn't think there was a need to have the pattern accurately follow the curvature of the shirt. 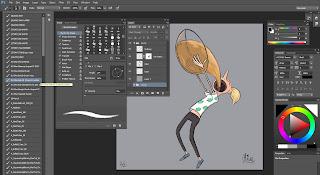 Once I had the end gag of my story which was the trigger for the idea, I had to find a setup for it.

I didn't want to spend too much time on the drawings as this would lead to my usual procrastination and discarded a discussion between two characters. Instead I just went with Katarina explaining the backstory. 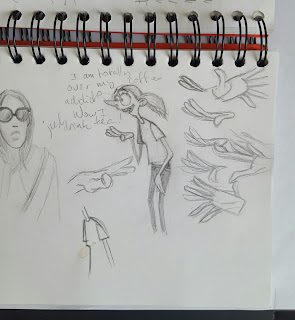 That pose seemed a lot easier to do until I had to address the right hand and the foreshortening of the thumb. What helped me as usual was just to look at my hand in a mirror.

I was also struggling with the placement of the breasts in relation to the sleeve. In the end I made the sleeve longer to avoid a tangent and get a clearer view of the breast line's silhouette in the right sleeve.

I then proceeded to do a cleaned up version at scale, still on my sketchbook. I have started drawing bigger lately as several artists I love also draw big (Stephanie Rizo, Chris Sasaki, ) and it allows me to get more details... This also makes them more frameable ;-) As you can see I screwed up and flattened the nice line of action that was present in the original drawing. The problem is that I went too quickly for a clean drawing with bold marks I couldn't erase. I could have started all over again but I really liked the way I had done the face and wasn't sure I could get it right again.

And now here is the final drawing in colour. I would normally use comics fonts for the speech bubble but my handwriting is becoming so poor those days that I would take any opportunity to practice. I am also jealous of my friend Nolwenn's mastery in the art of writing with a Wacom pen! ;-)

In the future I will also probably use one of Kyle's watercolour brushes as they look really good. 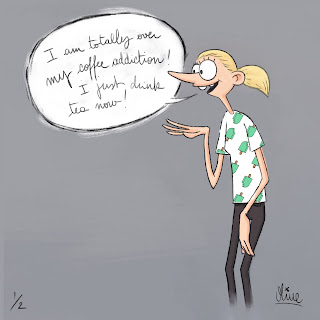 I hope this was useful to any of you wanting to get into digital drawing/story telling.